“Pakistan’s two large reservoirs, Mangla and Tarbela, which store Indus River water for the country’s vast irrigation network, are losing roughly percent of their storage capacity each year as they fill with silt from deforested watersheds” (Brown p. 35)

When I read this statement, it made me think of our field trip to CREW and made me consider how important it is to maintain our watershed. Before CREW, I never knew what a watershed was. However, as I learned about why Ed Carlson and Mike Duever originated CREW, I began to have a lot of respect for them. After reading this statement and realizing how important maintaining a watershed is, I have more respect for the organization. It is obviously important to protect watersheds, and not deforest them, because damaging them can have major consequences for everything within the environment.

When I read this statement, it made me think of Soloman and Tobie’s disagreement in Smith’s A Land Remembered. Although I understood why Tobie’s was upset about Soloman deforest in the land for vegetation, this statement provided me with a new perspective on the situation. As it stated in this chapter, some civilizations in history knew how to keep their soil from eroding while other civilizations did not. Although Native Americans were not discussed, after reading this chapter and A Land Remembered, I realize that Native Americans understood the importance of maintaining the land and that by deforesting vast amounts of land, there would be a negative consequence for everything that lives off of the land. 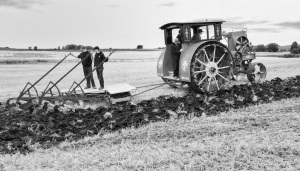 “The economics of water use do not favor farmers in this competition, simply because it takes so much water to produce food. For example, while it takes only 14 tons of water to make a ton of steel, it takes 1,000 tons of water to grow a ton of wheat. In countries preoccupied with expanding the economy and creating jobs, agriculture becomes the residual claimant” (Brown p. 42).

This statement made no sense to me. There are three things that are essential to any man’s survival: food, water, and air. Although I understand why we need steel, and that more water is used on agriculture than on anything else, if the world is low on water supply, I do not understand why we would use water to produce steel instead of using it on something that is more important like feeding people that are starving in the world. Using the water for food and drinking supply seems to be more important. However, I do agree with the author that we need to find a way to conserve water, while using it to grow food. I believe that when we were at CREW, they said there is food people can grow that will provide them with the nutritions they need and do not require a lot of water.
http://solvingworldhunger.weebly.com/about-world-hunger.html 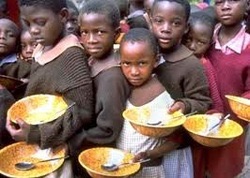